Earlier this week, I had the pleasure of talking to New Orleans soulful R’n’B artist Lucky Daye, who is set to perform at the 2019 BET Awards. Lucky Daye will perform a live rendition at the BET Awards, alongside the likes of; H.E.R, Cardi B, Lil Nas X, DJ Khaled, Migos, DJ Mustard, Billy Ray Cyrus, City Girls, Lizzo, Lil baby, and Kiana Lede.

Lucky Daye and I had a great Conversation about:

Continue reading to find out all you need to know about the delightful Lucky Daye. Whose London show was great and full of vibes, energy and left the crowd wanting more… You can also watch the full video on youtube

Hello Everybody! I am joined with a very special guest, and I’m going to drop a little cheesy joke….. It must be my Lucky day!

Because I am joint with Lucky Daye.

*Laughs* Yes, Yes, Yes. Thank you for having me.

Is this your first time in London?

But last time you were here, you were probably just staying in the hotel then?

You got here. but that was it?

Yea, that was it.

Now your name is really interesting. Why Lucky Daye?

Erm… Well… Lucky is when preparation meet opportunity. And I want it to be every day. It took me like two weeks to figure out. I only looked up the definition of ‘luck’, because one of my family members thought it was like it sinful to call myself Lucky.

Now speaking of Marvin Gaye, you see when you sing you got this like old soul passion.

So, who did you grow up listening to, cause I feel like I can hear it in your music?

errrr….. I eventually listened to like Tyrese. And  well I  never name women, but there it’s a lot of women that have influenced my voice.

Yea!? Can you hit them high notes though? Like Mariah?

Yea, I just got my whistle voice.

I’ve been working on mine for a very long time.

Oh, Really? Let me hear you?

*Attempts to sing*No. Oh, It’s just not there. It is usually there but I’m just stage fright.

I mean you know- there is a professional in front of me.

I’ll send you a voice recording then you’ll get it. If it sounds like Mariah it’s not her, it’s me!

Yea, I listened to Tyrese and Kelly price.

The Iseley Brothers and that?

But you do know that song ‘Mr Big Song’, right?

The ‘Mr Big Song’? How does that go? Use your whistle voice on that one.

You can’t sing that! *Laughs*

What about? Oh yea. What about Busted? Is that? oh

You can’t sing that either. Cancelled!

Moving on to the next question. Moving on swiftly. Your tune Karma taken from your latest project, talk to me about that one?

That song…. Tune-How y’all say it. That is called Karma and it’s talking about a friend that I had…. that I wanted to just stay friends with so bad- because she was so sad all the time. But then she liked me in a like romantic way and I knew at the end of the day I just wanted to help her not be sad. Because for me my care comes before my physical needs.

That’s a disaster story right there. But nah she  alway came around telling me stories and stuff. And like I’m empathic. I wanted to like build her confidence and that. She liked me but I couldn’t like her because that wasn’t the way. But, it got to a point where it was like…alright- you cute, you nice, you know what I’m saying?

Did you let her grow on you?

I let her grow on me

But  does that then make you think you’ve got a kind of maybe, when something is presented to you, take it straight away or like… do you know what I mean?

But I didn’t like her (in a romatic way). but when I started liking her and I just like prep her up. She went to like a deeper depression, because when I wasn’t around it was worse.

Yea. Did you become her happiness?

I never knew that listening to the song. It sounds like

It gave you that feeling?

Yea *Sings  You make me wanna* through my Karma… Remix!

That’s interesting how you are able to go so deep on a tune, but still keep it up beat

yea  because, I wanna be ok to dance. I wanna be ok to know that. What is crazy is her mom tried to blame it on me. She killed me. I was broken down. I didn’t even have a Christmas. I was like wow. that crazy.

How are you know Lucky?

Aww this is so sad. I feel for you. I’m going to need tissue

I know, this is why I don’t talk about my songs. Now you gonna be thinking about it in a sad way? You suppose to be dancing!

What we will do is everybody listening  out there. I mean I like it, it’s chilled,  it’s a vibe. What we gonna do is when we are out with friends (summer is here),  we are gonna have a good time with it. It is when we have gone home and we are by ourselves we can take it in.

Think about it. And have a box of tissues?

I’m gonna be looking for you.

I’ll be at the front. So when you point at me Imma scream, ‘He was pointing at me’?

What kind of energy you gonna bring to the stage?

I got my band. I flew my band out.

I aint gonna do that for nothing.

I love a band!

Oh yeah? We bout to tear that stage up. It’s gonna be a sweaty floor, when I get off stage.

when I get off. You gonna be on the floor.

I don’t like on the floor either. Maybe I should wear jeans, i was gonna wear a nice little dress and heels.

You should wear a raincoat.

*Laughs* and an umbrella. How does it make you feel to have so many fans around the world?

Well – Somebody just bombarded me for an autograph outside. So, that was nice

Was, it weird. Is it weird when people do that?

I was like damn how you supposed to be like a star? Are you meant to sign it? Are you meant to be like, nah so they can want it next time. I don’t know. But I just want to be nice to everybody. For some reason. so, I just signed it- then I was like let me take a picture. cause I appreciate them. I didn’t make the songs for people to like do that, I didn’t make the songs for people to go crazy over me. or noting. Cause I go crazy over them. I got crazy over people, and I realised that.

No way? That is so awesome. That’s nice. Don’t ever lose that. Some people over the time get a bit tired of it.

Nah, I do. Don’t (ever lose it)?Nah, I am not gonna be uptight. I’m from New Orleans man! Southern Hospitality. You know we know how to do all that. We keep it real country.

I like that. I’ve never been to New Orleans.

You know we have great food?

I’ve been to Atlanta, is that close?

OK. I’ll make sure next time I go over. I’ll go there.

Did you live in Atlanta?

Yea, I stayed out there for like 3 years, 4 years. and I was just trying to like survive. And make money.

Were you there whilst doing music?

Yep, that’s why I went. Like, trying to make music,  because I didn’t know nothing about music.

I’ve notice in America, people either go to like LA (Los Angeles) or Atlanta.

I don’t know- im making up. Just like I dont know

LA was more for  acting. New York was more rapping and Atlanta was more like…..

Who would you like to work with in the UK?

Who would I like to work with in the UK? Errr…. Is Sampha still working? He is cool!

Do you know who you will sound good with? Nao

I hope she come to my show

If she does come to your show. I will be screaming for you and her.

*Laughs* Ok, that will sound good. That will be fire

Yea, she is sick. You got to reach out

That would be crazy I was listening to her song ‘Another lifetime’ today. It is one of my workout songs.

Oh, you’ve got Nao on your workout playlist?

I workout to Soul R’n’B. Y’all can workout to Trap all day. I don’t care. I’m working out to slow stuff.

I heard someone else say that. Like they run to slow jams.

That will put me in my feeling. I’ll probably run to like my ex’s house

But like Jodeci Feenin’. I’ll be like running to my ex. I went for a run but I ended up at your house like, I don’t know how I did this?

Ok, we are gonna wrap this up. But before you go. To prepare for you show Tomorrow. Where can be keep up with everything you have going out?

Are you dropping a video for Karma?

Imma drop a video for every song.

Do you know why? because I fully know what Karma is about now? Before I was like Bug-a-Boo. But if you tell that story in a music video. It would be like a mini movie

Oh my God, you said the magic words. I think you woke up a chil’. Mini Movies. Yea.

I’m telling you, and obviously if you are looking for a lead?

Yea, I can be the girl moving in slow motion. Loook….

*Acting out scene* That’s me crying cause you don’t like me. Look see

I think I did quite good- innit?

Thank you for joining me today.

Thank you for having me.

Enjoy the rest of your time in london

And i’ll see you tomorrow at your show

Make sure you tell me, where to turn up at?

Do you want me to tell you

On air or of air?

No this is off now. Done 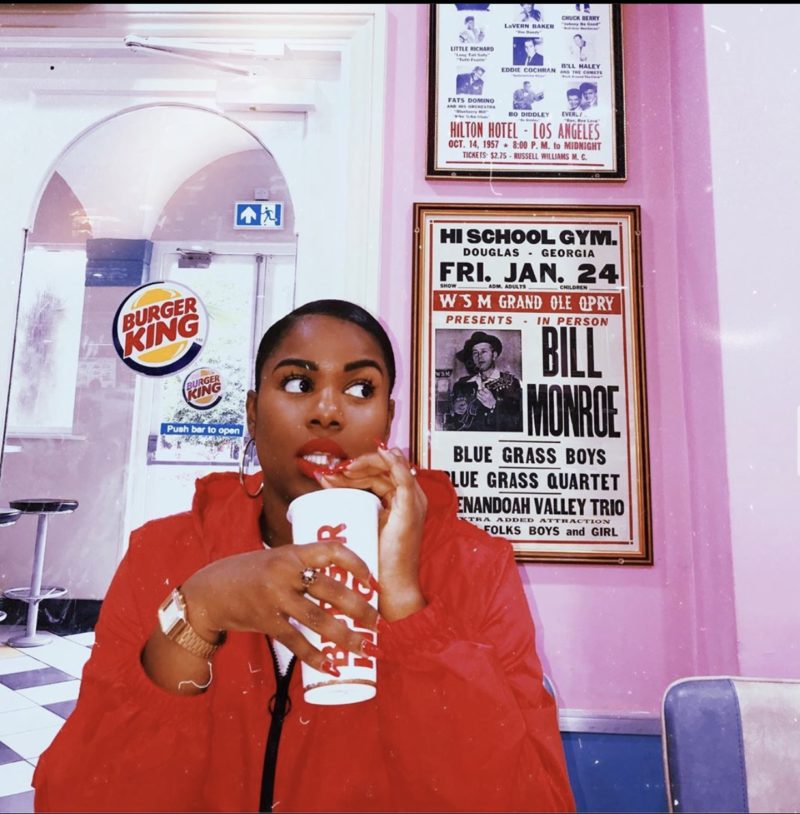